Known for evocative paintings of the Southwest, artist Audley Dean Nicols was born in Pittsburgh, Pennsylvania, where his first art teacher was his mother. Artistic talent ran in the family; his aunt, Maria Nicols, was the originator of Rockwood Pottery. Nicols attended the Art Students League in New York and also pursued additional studies at the Metropolitan School of Fine Art before traveling to Europe to further his education. Upon his return, he began a career as a magazine illustrator for prestigious publications such as Collier’s and Cosmopolitan.

As it was for so many artists before him, the lure of the Southwest was powerful. Nicols traveled to the West in 1919, moving to El Paso, Texas, in the late 1920s. He established his career as a muralist and painter of the starkly dramatic linear vistas of West Texas, New Mexico, Arizona, and California, earning recognition for his renditions of cowboy life and its western landscapes. 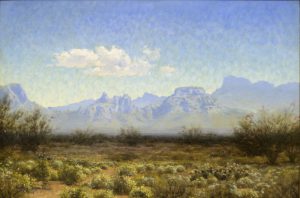