Arthur Musgrave was born in Brighton, England. He was a pupil of Stanhope Forbes at the Newlyn School of Art in Cornwall and also studied in Munich. In 1916, he went to Santa Fe where he was the first to paint the Museum of Fine Arts, then under construction. Later he donated several paintings to the Museum. He also spent time at Cape Cod, Massachusetts, where he had a summer house at Truro. His main residence remained in Santa Fe.

One of Musgrave’s works is in the British Embassy in Washington, DC. His wife, Helen Greene Musgrave, was also an artist, as were two of his daughters, Rosie Musgrave Bothell and Barbara Brooke Musgrave Tuthill. 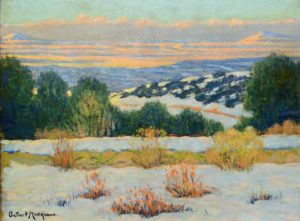