Traveling with the American Fur Company expedition to the annual fur trappers’ and traders’ rendezvous of 1837, Miller compiled an unparalleled visual record of the soon-to-be heavily traveled Oregon Trail, the Rocky Mountains, the fur trade, and Native Americans of the West. A romantic painter of epic proportions, Miller produced huge oil paintings from his fresh and action-filled sketches. His large canvases of buffalo hunts, trappers around the campfire, the Green River, and the dramatic Snake Indian cavalcade at the foot of the Rockies stunned sophisticated New Yorkers, who were accustomed to the calmer canvases of Thomas Cole and his contemporaries. Miller’s unique subject matter earned the young man acclaim as one of the most promising artists in the country. Today Miller’s work hangs in many permanent collections around the country, including the Boston Museum of Fine Arts, the Gilcrease Institute of American History and Art, and the Amon Carter Museum, Fort Worth. 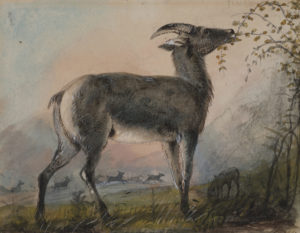 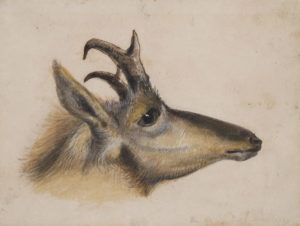 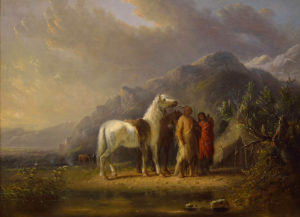