Painter and printmaker, Alexandre Hogue rose to prominence in the 1930s for his beautifully rendered and thought-provoking images of Dust Bowl scenes. His works appeared in 1933 at New York’s Museum of Modern Art and at the 1936 Whitney Museum of Art Biennial.

Raised in Texas, Hogue’s art training included the Denton Normal School and Minneapolis College of Art and Design. Afterward, he spent four years in New York as a commercial illustrator. In 1925, he returned to Texas and soon began to work in New Mexico, as well. Having befriended members of the Taos Society of Artists, between 1926 and the early 1940s, Hogue spent part of each year working in Taos. During that time, he became interested in learning about the Pueblo and Spanish communities there, and began to portray them in his art. Hogue moved to Tulsa, Oklahoma, in 1945, to lead the art department of the University of Tulsa.

Hogue’s works are included in the collections of the museums of the Smithsonian, the Gilcrease Museum, the Philbrook Museum of Art, Tulsa, Oklahoma, and in Paris at the Musée National d’Art Moderne. 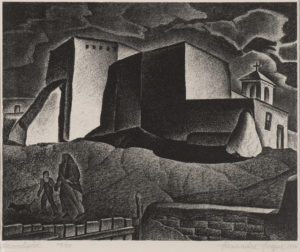 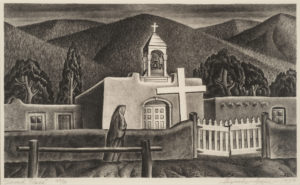