Albert Schmidt was born and raised in Chicago, Illinois, and attended the Art Institute of Chicago for four years. Later he traveled to Europe, to study firsthand the paintings of the great masters, before enrolling in classes at the Academie Julian in Paris. When he returned to the United States, his painting style showed the influence of the French Impressionists and he exhibited his works widely, including at the Pennsylvania Academy of Fine Arts in 1911, at the National Academy of Design in 1914, and at the Panama-Pacific Exposition in San Francisco in 1915.

Schmidt and his wife made a permanent move to Santa Fe in the early 1920s. He immediately became an active member of the art community with frequent exhibits of his work. Some of the shows included other leading New Mexico artists of the day, while others featured Schmidt’s work exclusively. In fact, between 1928 and 1958, the Museum of Fine Arts in Santa Fe featured Schmidt in one man shows twelve times. Currently the work of Schmidt is held in major collections around the country, as well as at the American Embassy in the Vatican in Rome. 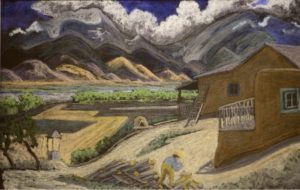