Born in New York City, Albert Groll became a much admired, successful Western desert landscape and skyscape painter, although he remained a resident of New York City where he associated with the cultural elite. Many of his landscape paintings are rich in color with elements of both realism and a sense of abstraction. Groll spent most of his student years in Munich, Germany, at the Royal Academy, where he studied with Ludwig von Löfftz, but he also studied in London, England, and at the Royal Academy in Antwerp, Belgium.

After he returned to the United States, Groll painted along the Atlantic Coast. He then traveled West with ethnologist Stewart Culin of the Brooklyn Museum, who was writing a treatise on Native American games. Groll painted many Arizona and New Mexico scenes, and his skyscapes, depicting towering cloud formations, are particularly striking. In time, he became a friend and guest of Lorenzo Hubbell at his well-known Ganado trading post.

Groll is also credited with introducing William Robinson Leigh to the Southwest. They had studied together in Munich and, at Groll’s suggestion, Leigh first visited New Mexico in 1906. Throughout his career Groll consistently won favor at competitions and exhibitions. His awards include the Salmagundi Club’s Shaw Prize in 1903 and 1904, a silver medal at the Louisiana Purchase Exposition of 1904 in St. Louis, the George Inness gold medal from the National Academy in 1912, and a silver medal at the San Francisco Panama-Pacific International Exposition of 1915. In 1910, he was elected to the National Academy of Design. 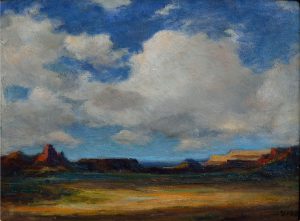