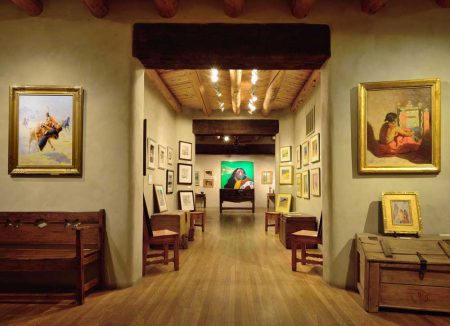 Zaplin Lampert Gallery partners Richard Lampert and Mark Zaplin (1952-2014) grew up together in Massachusetts. In 1972, in a Boston bookstore, they discovered a large collection of photographs by the legendary Edward S. Curtis. This trove of images, from Curtis’s thirty-year project documenting the American Indian, led Richard and Mark to the West and to their careers as dealers in fine art.

After settling in Santa Fe in 1977, they traveled the United States as private art dealers, exhibiting the Curtis works at museums and private institutions. As their business grew, their interests and expertise expanded to include historic paintings and works on paper by the pioneering artist/explorers of the American West, including such names as George Catlin, Karl Bodmer, Alfred Jacob Miller, Thomas Moran, and Albert Bierstadt.

Zaplin Lampert Gallery opened its doors in June of 1987 on Santa Fe’s historic Canyon Road. The gallery quickly gained recognition as a premiere source for the works of the early artists of the Taos Society of Artists and the Santa Fe Art Colony, and for American paintings of the nineteenth and early twentieth centuries. It has also established itself as a primary resource for collectors of the celebrated New Mexico printmakers Gustave Baumann and Gene Kloss.

The gallery now also features a superior collection of traditional New Mexican furniture, and a garden complements the gallery grounds and features the works of famed sculptor Allan Houser. Zaplin Lampert is considered one of the top galleries in Santa Fe, and has earned a stellar reputation for expertise and quality in the field of classic historical art of the American West.

BY APPOINTMENT ONLY
Wednesday through Saturday, 10AM to 4PM
Closed Sunday, Monday, and Tuesday